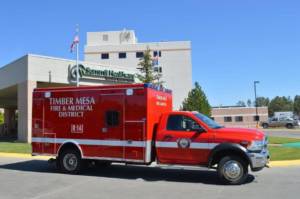 Prior to merger in 2014, the predecessor agencies to Timber Mesa all provided common services to their respective communities. One difference however, was the provision of ambulance transportation. Before merger, the only agency which provided ambulance transportation services was the Lakeside Fire District. The other agencies provided EMTs and Paramedics as first responders but relied on a private ambulance company to transport patients to the hospital.

In early 2015, the Timber Mesa Fire Board authorized an application to expand the ambulance service from the Lakeside community to the entirety of the Fire District. The application process and subsequent hearing at the Arizona Office of Administrative Hearings ultimately resulted in the Arizona Department of Health Services awarding an expanded Certificate of Necessity (CON) to Timber Mesa. This expansion overlaps the private providers service area but does not detract from their ability to service the area as well.